Fungal infection of nails (tinea unguium) is common. The infection causes thickened and unsightly nails which sometimes become painful. Medication often works well to clear the infection but you need to take medication for several weeks.

Between 3 and 8 out of 100 people in the UK will have a fungal nail infection at some stage of their lives. Toenails are more commonly affected than fingernails. It is more common in people aged over 60 and in younger people who share communal showers, such as swimmers or athletes.

How do you develop a fungal nail infection (tinea unguium)?

What are the symptoms of a fungal nail infection (tinea unguium)?

Often the infection is just in one nail but several may be affected. At first the infection is usually painless. The nail may look thickened and discoloured (often a greeny-yellow colour). Commonly, this is all that occurs and it often causes no other symptoms. However, it can look unsightly. 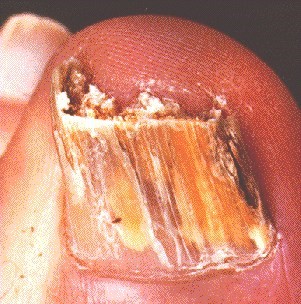 Do I need any tests?

Other nail conditions can sometimes look like a fungal infection. Therefore, to confirm the diagnosis, Dr Buckley will usually take a nail clipping and send it to the laboratory for testing.

What is the treatment for a fungal nail infection (tinea unguium)?

This is an option if the infection is mild or causing no symptoms. For example, a single small toenail may be infected and remain painless and of little concern. Some people may prefer not to take treatment because:

The option to treat can be reviewed at a later date if the infection becomes worse or if you change your mind.

However, treatment is usually advised if:

Antifungal tablets will often clear a fungal nail infection. The medication will also clear any associated fungal skin infection, such as athlete's foot (tinea pedis). Your doctor will usually recommend one of the following two medicines. The one chosen may depend on the type of fungus causing the infection. Both of these medicines cause side-effects in a small number of people, so read the packet that comes with the medicine for a full list of cautions and possible side-effects.

A nail lacquer that contains the antifungal medicine amorolfine is an alternative for most (but not all) types of fungi that infect nails. You can buy amorolfine nail lacquer from pharmacies as well as obtaining it on prescription. However, this tends not to work as well as medication taken by mouth. Your doctor will advise if it is a suitable option for your type of infection. For example, it may be useful if the infection is just towards the end of the nail. This treatment does not tend to work so well if the infection is near the skin, or involves the skin around the nail.

The nail lacquer has to be put on exactly as prescribed for the best chance of success. You may need six months of nail lacquer treatment for fingernails and up to a year for toenails.

Tioconazole is another solution that can be applied to the nail. It is available on prescription, although research trials suggest it does not work as well as amorolfine.

If other treatments have failed, an option is to have the nail removed by a small operation done under local anaesthetic. This is combined with treatment with antifungal medication.

Research is looking at newer methods of treating fungal nail infections. These include laser treatment and ultrasound. Initial results are positive but more evidence is needed about the long-term results of the treatments. Ask Dr Buckley for further details.

What to look out for with treatment

The fungi that are killed with treatment remain in the nail until the nail grows out. Fresh, healthy nail growing from the base of the nail is a sign that treatment is working. After you finish a course of treatment, it will take several months for the old infected part of the nail to grow out and be clipped off. The non-infected fresh new nail continues growing forward. When it reaches the end of the finger or toe, the nail will often look normal again.

Consult a doctor if there does not seem to be any healthy new nail beginning to grow after a few weeks of treatment. However, the infection can still respond to treatment even after you finish a course of medication. This is because the antifungal medication stays in the nail for about nine months after you stop taking medication.

What can I do to help?

Take medication as directed and do not give up without discussing this with a doctor.

Side-effects are uncommon with modern medication but tell a doctor if you notice any problems with treatment.

Tips on nail care if you have a nail infection, with or without taking medication, include the following:

Studies suggest that in about 1 in 4 cases where the infection has been cleared from the nail, the infection returns within three years. One way to help prevent a further bout of nail infection is to treat athlete's foot (tinea pedis) as early as possible to stop the infection spreading to the nail. Athlete's foot is common and may recur from time to time. It is easy to treat with an antifungal cream which you can buy from pharmacies, or obtain on prescription. The first sign of athlete's foot is itchy and scaling skin between the toes. See separate leaflet called Athlete's Foot (Tinea Pedis) for more details. Also:

back to all services

Your health is our passion

More information about the cookies we use - Learn more